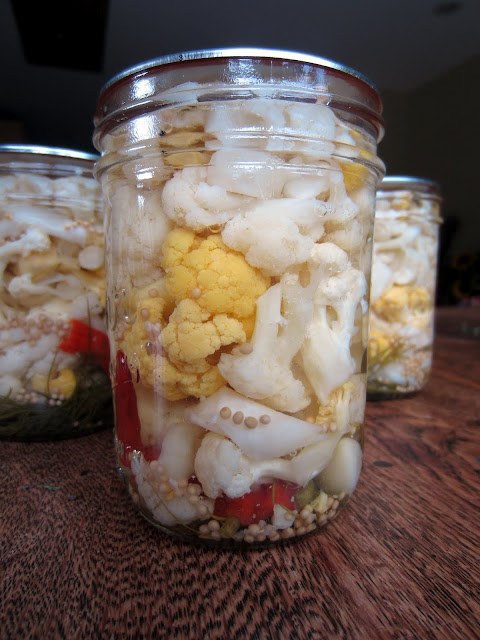 This weekend we had a glut of food leftover from our harvest that didn't sell at our Farmer's Markets. After keeping some for our own plates and trying to work some of our vegetables onto restaurant menus, we decided to preserve some and donate the rest to the food bank. There are a number of canning posts from this busy weekend so be ready!

First up from our farm fresh food is Dilled Cauliflower, a recipe on page 95 of one of my default canning books, Pickles and Relishes: From Apples to Zucchinis, 150 recipes for preserving the harvest

. The recipe simply combines a 1:1 vinegar/water brine with added salt and mustard, plus fresh dill, garlic cloves, and chili peppers for flavor in the jars. I love how the different colors from the two varieties of cauliflower add some nice color variation. The yellow is a variety we grow called Cheddar Cauliflower and it tastes the same as the white variety.


Equipment preparation always happens first so I lined up my pots, jars, jar-lifter, lids, chopstick (I'll explain), measuring cups, and ingredients. Next, while the jars were being sterilized in boiling water, the cauliflower was cut from it's stalk and broken into small/medium florets and blanched in steaming water for only 1 minute, then cooled. 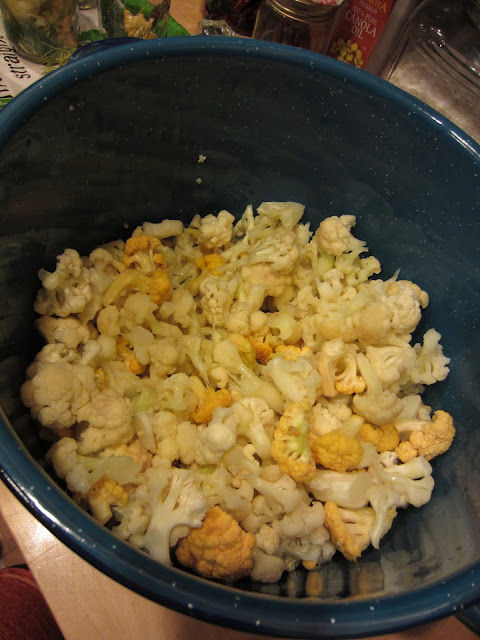 Lining the jars up for packing, a sprig of fresh dill, 1 hot pepper and 1 clove of garlic was added to each jar for flavor, after which the cauliflower was crammed into the jars. 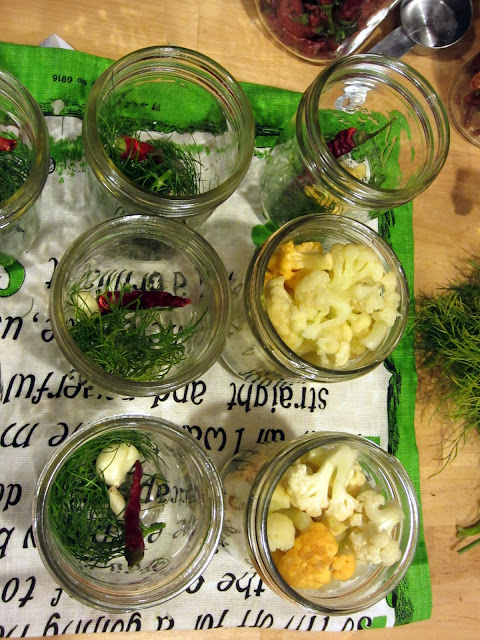 The brine had simmered for 5 minutes then ladled into the jars, filling to almost the top. At this point, the chopstick was inserted down the side of the jar and wiggled a bit, in three different points in each jar. I was ensuring that the air bubbles trapped between the veg pieces were dislodged and filled with brine instead. I added a bit more brine, leaving about a 1/2 inch of headspace. Note that I didn't have enough brine for my last 4 jars and had to make another batch while the first jars processed. Darn! 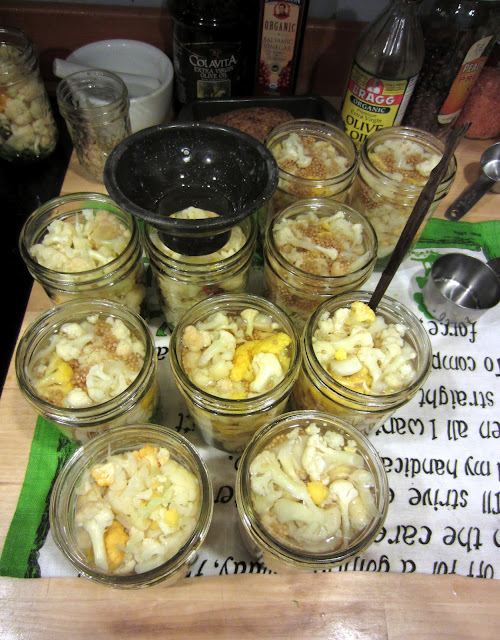 This recipe gave a 15 minute processing time for quarts but I was preserving in pints, so rather than make a guess on the time reduction I had to dig a little to determine the appropriate processing time. The USDA home canning guide said 10 minutes in a boiling water bath canner, so that's what I did. And the 11 jars I ended up with from 5 lbs of cauliflower look perfectly delicious... except for that one jar that proved the argument for hair nets in the kitchen. Dang it! I can't believe I found a hair INSIDE one of my jars. Oh well, it's clearly marked and only I will eat those ones. 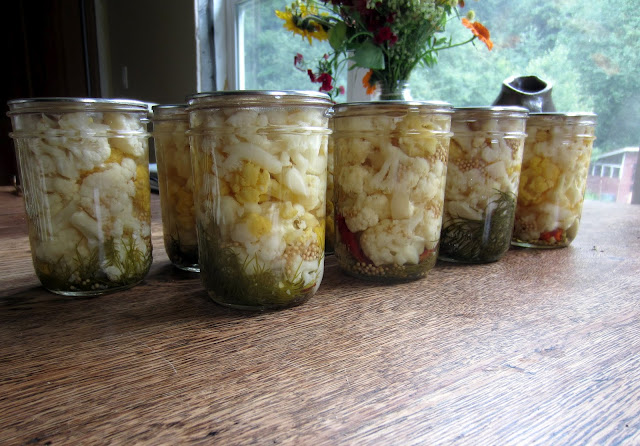 PS. There's an untold story hiding somewhere in these pickles, a long break taken between the cauliflower prep and the rest of the work. I hate interrupting the canning flow, but my brand new paring knife proved within minutes of its first use just how sharp it is. While trimming the cauliflower from its stalk I was foolishly holding the crown in my hand, the same way I've trimmed fruits and vegetables my entire life... which isn't a good argument for the method. I slipped and knew immediately that the cut was deep. After gushing blood all over the apartment form the kitchen sink to the bathroom in search of something to wrap my hand with, I went and found Anne and Peter (the farm owners) to ask where the nearest urgent care is.

With their aid in cleaning and wrapping the wound and the generous help from a doctor friend of theirs, Peter drove me to Bainbridge Island and the kind woman met us at her CLOSED office (yes, I know how lucky I am) to stitch me up. I am so, so, so thankful. She said I pretty much cut it as deep as I could, and thankfully no tendons were in the path of the knife. Brace yourself... because this is what I look like 8 stitches later when re-dressing the wound this morning. It hurts. But I've got ibuprofen, finger gloves, and more canning to do (plus farm work all week). Wish me luck! 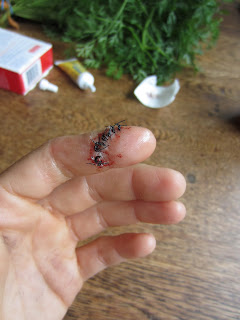