A hen + a rooster. (graphic). My first time killing a chicken on the farm.

*This story contains a somewhat graphic description and photos of dead chickens. Please consider this before reading.

One Thursday evening, about a month ago, I got a call from the boss man. He seemed agitated and wondered if I was home. "Yeah. What's up?" He said he'd been seeding flats in the greenhouse when he heard some commotion in the yard; the dog was mad and the chickens scared. When he came out he saw a bald eagle descend into the chicken pen and use its strong talons to break a chicken's back, instantly rendering it dead with no time to prevent it. He was able to get the eagle out of the chicken pen without it carrying away our fowl but this left us with a freshly killed chicken on our hands, which Peter offered to me.

This was my chance. For weeks we had been talking about getting rid of the rooster who was past his young prime and remained to be mostly an annoyance to the family and a rapist to the hens. He wasn't needed on the farm and it only made sense that we turn him into food if we would say goodbye. So when Peter offered the hen to me and I explained that I'd love it but was unfamiliar with the process of gutting and cleaning the animal, I suggested that if he was willing to teach me we could also take care of the rooster. He agreed.

I was nervous. Even though I'd read books about processing animals, I felt unprepared. Throughout my adult life I've felt that to be omnivore I must participate in the full life cycle of an animal(s), but this was new territory. The week before one of our old hens (7 or 8 years in age?) had a scare when the dog ran by and died of what seemed to be a chicken heart attack. Watching the last flutter of her wings and picking up her warm, limp body from the pen struck a chord. I was sad but understood that eventually all animals die. Peter was away from the farm that day and since I didn't yet know what to do with a dead chicken I ended up digging a 3 foot hole and burying her.

And so we dealt with the chickens. Both the rooster and hen were Barred Rock chickens, pretty black and white things. Since then hen was already dead and I could do no harm, Peter encouraged me to try swinging the axe to cut the chickens head off. I doubted my ability and was proven right when I didn't finish the job in one fell swoop. Peter showed me how, and then he proceeded to do the same to the live rooster. I didn't feel confident enough to try on a live animal. I had prepped the hot water to temperature-- my trusty reference book, Butchering, Processing and Preservation of Meat: A Manual for the Home and Farm

, said the temperature should be just under 185 degrees F. Peter showed me how to gut and pluck the chicken and I did the same to the rooster, surprised by how narrow the passage was between his legs compared to the hen. I could barely fit my small hand inside. 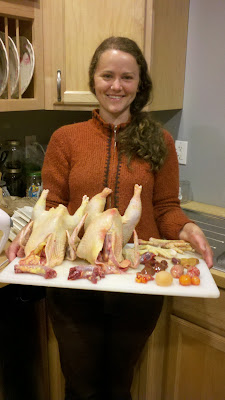 Note: This was a life experience achieved. A goal complete. A step in the right direction. Being able to slaughter the animal that I fed every day was moving and I'm glad I had the personal will to do it.

These were some things I learned, in no particular order and possibly of no importance to you.
And now for the interesting comparison in picture form:

We had to cut into the skin to get my hand inside the rooster to remove the entrails. Also note the difference in the meat on the breasts of the chickens. 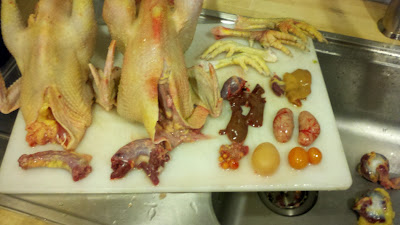 One hen, one rooster. Two chicken necks. 4 chicken legs (for the stock pot). Various innards. The liver of then yen was almost a yellow color which I learned was related to their diet and the amount of fat on their bodies. A yellow-tinged chicken liver is a fatty liver. I saved both of the livers for later use. Also pictured are the two testicles positioned directly above the eggs. And I was surprised to learn that at any given time the chicken has eggs in various states of production-- there is one pictured that was membrane covered and close to being laid as an egg. There was two yolks, one full sized and one a bit smaller that hadn't yet developed a membrane. And there were *many* little tiny yolks clustered together, remind me that my own body has various eggs getting ready to head out during the course of my life. I like realizing my own humanity.

And in this picture you can see the impact wound from the eagle talon, located on the back of the hen. 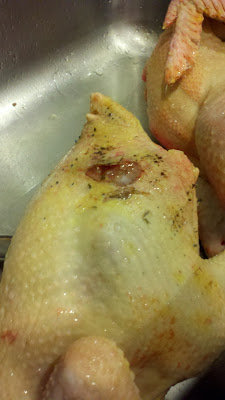 Coming up... the rooster in the pot after marinating for 4 days.
Email Post
Labels: death farm food meat