Last Sunday I vowed to take advantage of the public access to waterfront and forests now that I'm surrounded, and boy did I win big yesterday. Reading that tide would be lower this weekend  at -2 feet, Michael and I picked up shellfish licenses and went digging for clams! And had a good haul! After checking the health status and advisories of the beaches near us we hiked down to beach DNR-68 just south of Point No Point and found mostly cockles, a few manila clams and native littlenecks, and a couple butter clams. Most of the shellfish on this beach were larger in size with very few steamers (clams small enough to be tender and taste good just steamed and eaten with their broth and crusty bread). 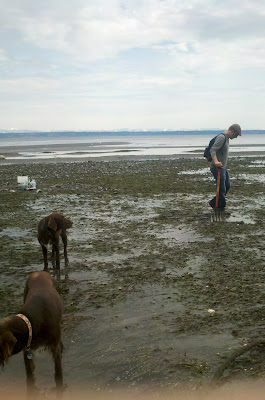 There's one dead clam in this bunch... don't worry, I threw him out when I noticed. 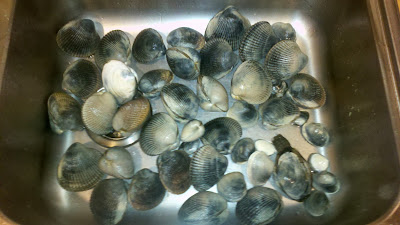 Last night I rinsed off the seawater and cornmeal mix they had been soaking in and mixed a fresh batch of saltwater (I no longer recommend this!) and cornmeal then left them in a cool place, hoping this will further clean the clams. The clams went crazy when I changed the water (spoiler: because I was killing them)! I've never seen clams extend their necks and move around that way before... it's fairly odd. You can see a couple in this picture. 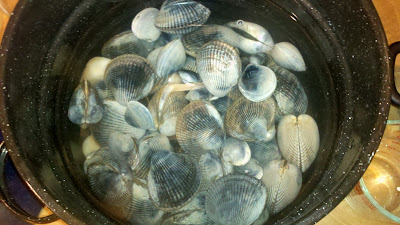 Later today I plan to steam the small ones for lunch and then steam the large ones just enough to open them up in order to make clam broth and chop the up the meat (then freeze it for later use). Clam linguine next weekend... with nettle pesto. More on that soon. Depending how much broth/meat we have left I might try and make a soup/chowder too but it will probably have to wait until the next low tide.

I killed the clams. Silence... I killed all those clams that were meant for dinner, the heavy bucket of clams and seawater that Michael hauled a 1/2 mile up from the beach, the clams that we stayed out too late for and caused Michael to hit major ferry traffic and have what should be a 45 minute commute turn into 3.5 hours. I went downstairs shortly after noon today and picked up the pot; when I looked inside all the clam necks were hanging out like dog tongues, limp and wrinkled and already discolored. They were definitely dead. After crying about my stupidity, the wasted clam flesh (they decompose quickly and are no good once dead), the hard work for nothing, and confessing my mistake via text message, I put on my big girl panties and told myself that tears won't make clams come back to life but with another low tide on my hands and the day off, with a hurried pace I could make it to an open beach in time to dig more clams to make up for it. And I did.


This time I went to Shine Tidelands State Park (again, green on the health status), an area that is regularly "seeded" or enhanced with added clams and oysters. When I arrived I followed the lead of two large groups of people out digging in the mudflat/tidelands who seemed to have exciting success. There were shouts of joy in some other language and buckets being filled... but after about an hour of my own digging and managing only to slice my fingers and find a few cockles but not much else, I realized those people were digging horse clams and geoducks. I moved up toward the rocky substrate at the mid-tide level where I'd seen a few people digging earlier and noticed clams occasionally spurting water out of the ground as I walked by. Finding better success, I stayed in this area and quickly filled my 40 clam limit. I found a much larger number of small clams and was glad to have the measuring tool that helped me determine if the clams were large enough to keep. 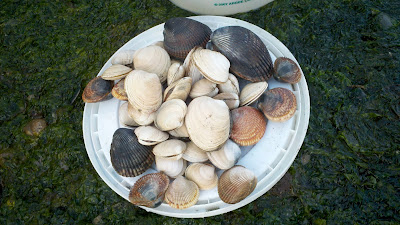 While I was at the beach I met a woman who was also digging for clams and we talked a bit about methods. She was smart to carry a small hand rake for the garden. I was carrying something closer to a small pitchfork. I confessed to her too that I'd made some terrible mistake and killed the clams from yesterday's catch; she suspects the brine was the cause. Following her recommendation I rinsed the clams in the sea water and then covered them in the bucket with additional sea water. I headed home around 4:30 and came home, added cornmeal and waited only a few hours before scrubbing them in the sink and steaming. Success! 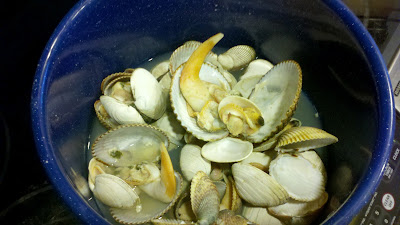 When I steamed the clams I added a 1/2 c water per pound (total 4.25 pounds) of clams and bit of garlic and onion like this page recommended, and also used this link for reference. I quickly ate a bowlful of the small clams for my very first approach at eating steamed clams, and was delighted with the taste and texture. The medium sized clams... not as good. The bread? Essential Baking Rosemary bread with butter, the perfect accompaniment. I added a squeeze of lemon juice to my bowl and a bit of butter. Yum. 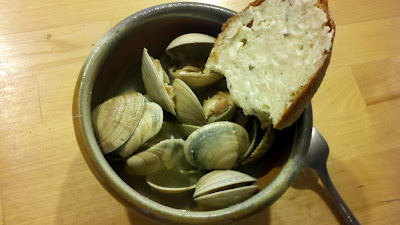 Once the clams and broth had cooled I prepped them for later use. Cleaned the goop from the clams... weird gooey grey-green shit from inside the neck and stomach, then chopped them up and added them back into the broth I had strained through cheesecloth. Double bagged them and threw them in the freezer. Done! 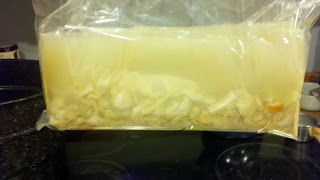 PS. Quick check of body and mind systems now that I've completed my first farm week: Tired, sore back, tender fingers, happy, excited, lonely, inspired, thankful, well fed. Yesterday I was washing my hands at the sink and while looking down I noticed my hands and forearms are already changing, beginning to look different from before I started. Note the perpetual dirt under nails, the tough and dry skin, the fingertips becoming calloused. They appear stronger, veins more visible. My hands have never been delicate and feminine... but I should probably invest in some hand salve.
Email Post
Labels: farm food forage
Location: Poulsbo, WA 98370, USA