Last year while farm dreaming (dream no more, I start my farm internship next week!) I loaded a picture of my great-grandma's tractor laden with cantaloupe and watermelon, then later made jokes about watermelon obsession in my family line and posted a picture of her abundant harvest of squash, watermelon and pumpkins. I'm reminding you of this because I've finally uploaded the pictures of Michael's watermelon rind pickles. I didn't make these sweet beauties but I did eat the flesh of the two, 7 lb watermelons. The best I can assume is that I consumed 10 pounds of fruit in about 3 days and it worked in my favor because he doesn't care for it. I can't wait for watermelon season to come again... 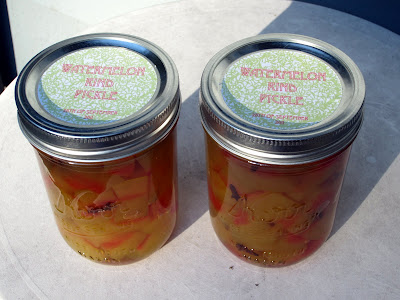 In the meantime I'll get my sweet satisfaction this way! I love how the little bit of red flesh adds a splash of bright color to the otherwise yellow/green-tinged fruit pickle. They are festive and taste like candy, practically no sour bite at all. 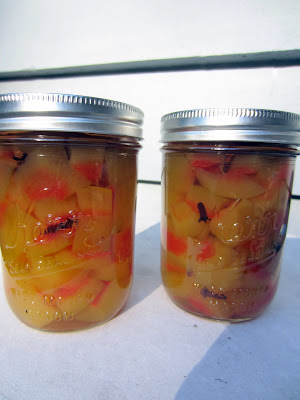 We started by buying a couple organic watermelons from PCC and sliced them up, removed the delicious red fruit, peeled the hard green skin from the rind, then chopped it into chunks. 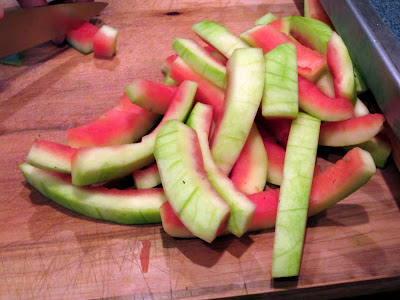 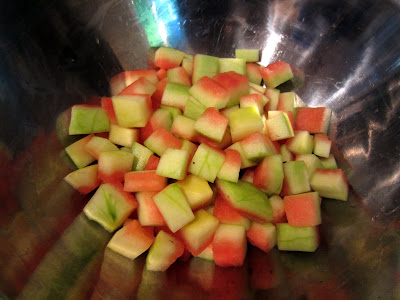 This is where my work stopped. Michael did the rest which included making a syrup/brine and soaking the pickles for 24 hours, then reheating the brine and covering the pickles again for another day, and so on as the recipe called. I believe it was a 3 day pickle. He canned them, made beautiful labels, and now I eat them with pleasure. :) 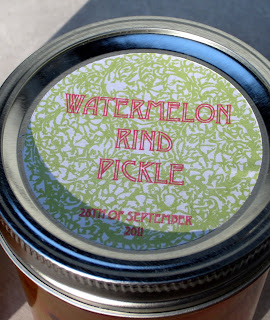 PS. I think it's time to try my hand at fermentation! For Christmas I received a ceramic pickling crock and just the other day I received a book I've been drooling over for months-- Forgotten Skills of Cooking: The Time-Honored Ways are the Best

by Darina Allen. This book was introduced to me as the Irish equivalent of the River Cottage Books

, and is a compendium of traditional skills, recipes, and foods with topics such as fermentation, foraging and game. If the River Cottage book of Preserves was my go-to book of 2011 I imagine this will be one of my favorite references for 2012.

Have you fermented anything? Tell me! Forgotten leftovers in the fridge don't count... otherwise I win.
Email Post
Labels: books canning food handmade