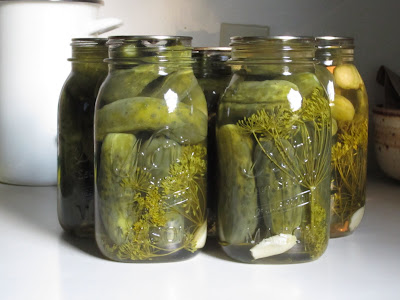 Some days you gotta leave the city, scoot away, even if it's just to a smaller town 30 miles away. On a jaunt to Snohomish where antique stores overrun the main strip, my beau and I noticed the market for Stocker Farms was open and made a mental note to swing by on our way out. A surprise car show, loud music, and two "antiques" later (a chinois for jelly-making and an old canning/preserving book), we left while the sun was still gracing us with it's autumnal glow through golden-tinged trees. A stop at the market proved bounteous in the cucumber department as well.

, I started the brining process of the cucumbers on Sunday night. This was basically a two-day pickle recipe; you brine for 24 hours, rinse, then pour the boiled syrup of vinegar, spices and sugar over the pickles and let them soak submerged in the mixture for another 24 hours. That's where I was last night, having a big batch of cukes ready to be processed. As the recipe suggested, I sterilized my jars, reboiled the same syrup drained from the cucumbers and when those two things were done the cucumbers were packed in jars with a clove of garlic and fresh dill. Covered in hot syrup, air bubbles released, and processed slowly in the water bath canner to preserve the crispness of pickles (maintaining a temp of 180-185 F for thirty minutes versus short rapid boil). 7 pounds of cucumbers equals 5 quarts of pickled success! 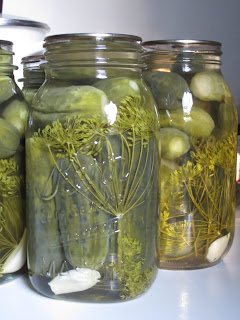 I look forward to cracking one of these babies open sometime in 2012. They need time for the flavors to round out... and patience is not my greatest virtue. Wish me luck!
Email Post
Labels: canning food
Location: Seattle, WA, USA