I came into an abundance of organic kale through a friend and as a means of somehow preserving a bit (there's no way I can eat the lot fresh before it goes bad), I did a canning experiement: Pickled Greens. I could not find any resources on canning hardy winter greens such as kale, chard, etc but it's quite possible that canning kale might result in a mushy and/or tasty mess. Right?

Starting at 10pm, Carson and I inspected the kale for any leaves that were bug infested or diseased-- and this was a most enjoyable activity. I got a good laugh when Carson told me his grandma used to challenge him and his brother to "find as many slugs in the garden" as possible. It wasn't until fairly recently that Carson realized his grandma's ploy was really a way for her to rid the garden of pests. Ha! Anyhow, then I made a potent brine with white vinegar, water, and some pickling spice I picked up from Remlinger Farms last summer (we visited the farm to pick our own raspberries), based on a recipe for pickling green beans or asparagus. After packing the hot, sterilized jars with kale I ladled brine to the top of each jar and swished the trusty chopstick around to release any trapped air within the kale. Water bath canned in boiling water for 5 minutes.

The next morning, I had this: 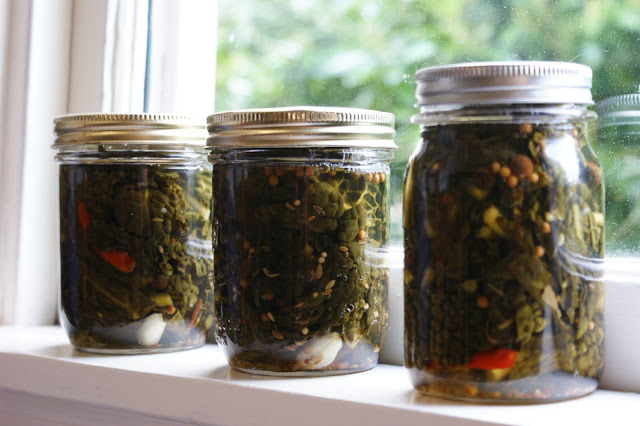 I just cracked open a jar to find what the final texture is and... drumroll... not mushy! The spines of the kale provide ample crunch and the leaves are soft, but not too soft. Major problem? They are waaayyyy too sour. I was worried about the vinegar to water ratio but now I'll have to figure out what dishes to use them in. They are not for munching/snacking. Any ideas?
Update, September 2011: I've rinsed these pickles then chopped and added them into salads, pilafs, etc and it's a great use. Next time I will use an appropriate brine from a book-- I need to accept that I'm not ready to write my own canning recipes. All in all, I say go for pickling kale.
Email Post
Labels: canning food goals