Behold the finished product of many months' slow and spotty work: Autumn Stripes, a pair of Noro Striped Knee-Highs. 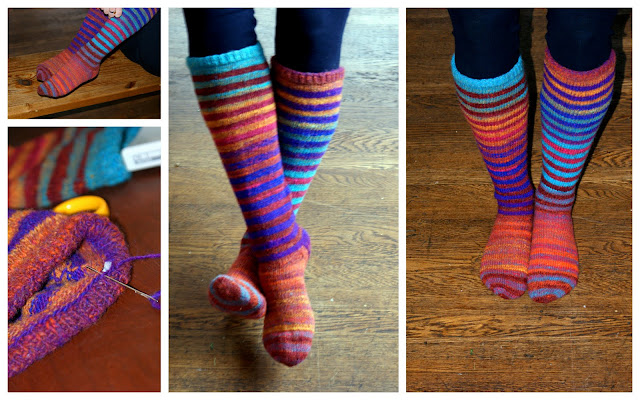 I started this project back in September of 2010 and was surprised how monotonous the endless length of stockinette stitch began to seem after only the first sock. And I still had a whole 2nd sock to go! I find myself entertaining similar thoughts and feelings when knitting man socks (those feet are so long), but we'll save that for another (soon to be ready) entry. I completed the first Noro sock in September, and the next half too. Unfortunately I kept the 2nd sock until December, and then didn't weave in ends and sew elastic into the casing until February. I swear not to leave unfinished items so sad and lonely for any length of time in the future... 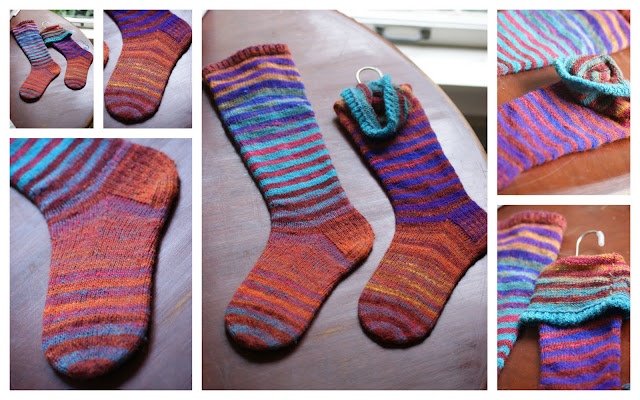 The technique used to convey solid striping rather than gradual color change that is so typically Noro is achieved by splitting a single skein of Noro Kureyon Sock yarn into two balls, and knitting stripes of 4 rows each the entire length of the sock. I did use one ball for the entire heel flap, otherwise the striping is continuous. I was surprised by the similar color change that occurred on the instep of both socks! Using the Spring Socks pattern by Eveli Kaur for direction, I was initially confused by the casing but worked it out quickly. After the final decrease on the leg I added 8 rows (2 of the stripe repeats) for length, but otherwise kept the pattern the same. For my first time using a striping technique I was surprised by the ease with which it was done, however I had to remind myself not to pull the carried yarn too tightly between rows. To keep the cuff of the sock from sagging I inserted 3/8 inch elastic into the casing, and by the end of it all I had used less than a single skein of yarn. I'm glad to be done and even more glad that they have been passed on to a good friend who appreciates nice wool and hand knitted goods (and humored my need to photograph her feet). 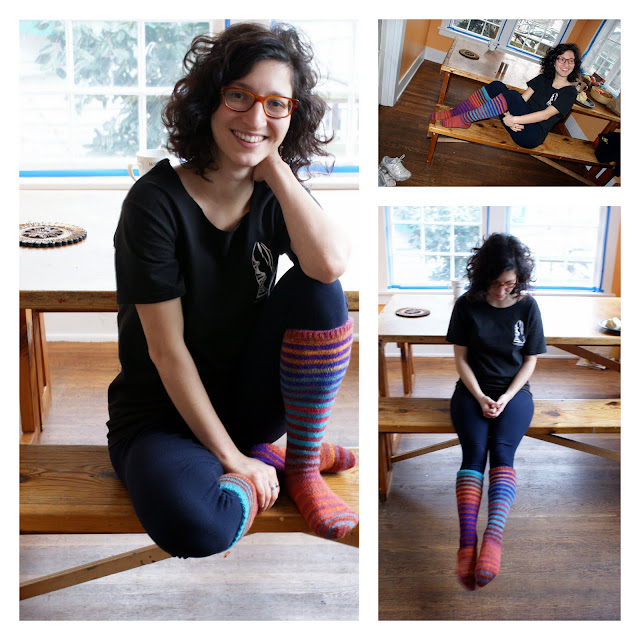 PS. At one point I almost lost these socks to Lake Union in Seattle because of a surprising breeze. That would have been terrible!
Email Post
Labels: crafts fiber arts goals handmade knitting