A few years back one of my roommates had an eye-catching sticker on the refrigerator from The Beer Nut in Salt Lake City, which said "MAKE BEER NOT BOMBS." Well here I am, asking if it's possible to shift the paradigm and have the best of both worlds. Couldn't we just have beer bombs?

The resounding answer is: yes. The proof is in my kitchen cupboard.
I came home tonight eager to see my man and when I saw/smelled the remnants of some spilled ginger beer (brewed about 3 weeks ago) on the kitchen counter I thought, "Aha! I've caught you now my dear-- sipping on stolen ginger beer." Alas he was nowhere to be found and slowly the gnawing suspicion of something terrible took over. I opened up the cupboard and there it was: Shrapnel. He had not taken the beer and left foolish proof behind, nor had he even been home. The spillage on the counter was the simple result of a bottle of beer exploding from too much carbonation.
Much of the ephemera I came across regarding soda-making warned of bottle explosions, and thus demanded bottling in plastic. When I made my ginger beer, however, I thought I had let the co2 ferment out before bottling and was even worried about flat beer more than overcarbonation-- this was an alcoholic beverage I was shooting for, not a soda. Fast forward a few weeks and lesson learned. Because of lower temperatures in my apartment I should have let the brew ferment for an additional 1-3 days before bottling to avoid the problem. 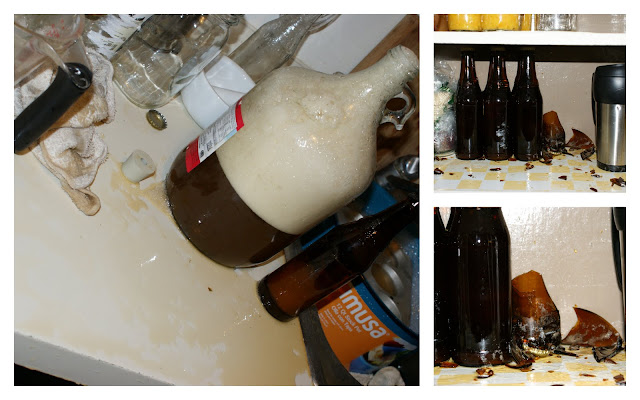 How did I solve this little snafu? With trepidation and minor fear of a bottle exploding and lodging glass in my eyeballs, face, and arms, I simply poured the foamy remnants into various vessels and have avowed to give some away ASAP and drink a lot. Shucks.
What a mess. I hope to never have another explosion.... and I imagine it probably scared the cat pretty good. Tiny pieces of glass somehow made their way into jars that were one and two shelves above the bottles. Crazy!
Email Post
Labels: brewing crafts food goals handmade