I started this brew just a couple days before the explosion of my January batch of ginger beer and my brewing mojo took a blow. Regardless, this batch is nearing the end of fermentation and will be ready to bottle in a couple days and after a few months of aging to round out the bitterness I will sample and report back. It's too bad I couldn't get freshly dried wormwood flowers for the aroma... maybe next time. 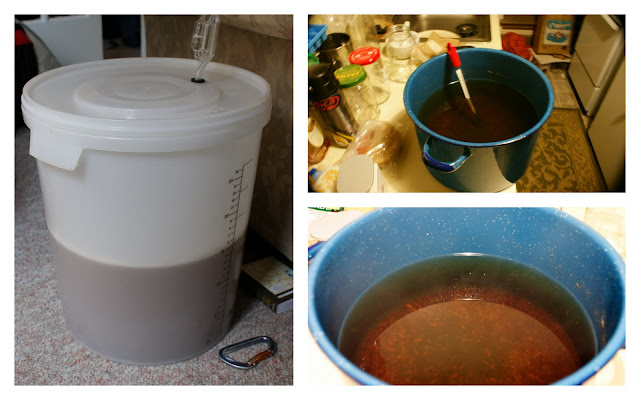 The brew was easy. I boiled the wormwood, strained it into the bucket with malt extract and honey, and pitched the yeast. Brewing beers without grains and hops really helps keep the chunky mess to a minimum. For more information about this recipe and wormwood's medicinal, spiritual, and brewing uses check out the book I've committed to for the year: Sacred and Herbal Healing Beers: The Secrets of Ancient Fermentation


PS. Part of the reason my ginger beer exploded was because I didn't check the original or final gravity of that brew (which shows, via density, how much of the sugar has been converted to ethanol), and had I included that critical step I would have known the batch did not ferment as long as it needed. I'm a beginner. Have mercy.