I'm sure y'all remember the classic 3rd grade science experiment, a wild volcano made out of clay with a hidden vat of vinegar inside just waiting for a bit of baking soda. The anticipation, the build up, and the sudden foaming and wild run-off of sour liquid that mixed the paints and colors into a muddy mess, effectively turning a work of art into a blob.

I had the same shock and awe experience tonight, but it was the adult version and instead of a volcanic eruption I had an eruption of fermented beverage. Awesome! Ginger Beer 1. Carson 0.

Last night Carson stuck a ginger beer (from the recent homebrew batch, bottled about 2 weeks) in the fridge for me but we didn't get around to drinking it until tonight, 24 hours later. I also had thrown a 2nd bottle in today, refrigerating it for 6 hours. The two of us cracked our beers open and mine had slight foaming action, producing a mild head and full carbonation. Carson's beer, however, literally erupted into the air, spewed out of the bottle, and as he ran for the sink spilled gingery goodness on the counters and floor.

What's the deal? Carbonation always seems to increase in homebrew when refrigerated, but I can't find any hard proof that this actually happens. It may simply be my perception of the cold co2 bubbles in my mouth, tricking my senses with temperature. It could have been the bottle Carson was drinking had more yeasties and sludge from the transfer process (fermentation vessel to bottle), meaning more action and conversion of sugars to co2 and alcohol. I seemed to notice more particles in his beer, though mine simply could have stayed settled at the bottom. It's also possible that his specific bottle was contaminated/infected during the bottling process but he didn't complain of any difference in odor or taste. I did not prime this batch so those possibilities (not mixing well, too much sugar in one bottle) are out the door. I don't know. The only real differences were the refrigeration time, and that his beer was bottled in brown glass. Mine was in a clear glass bottle. 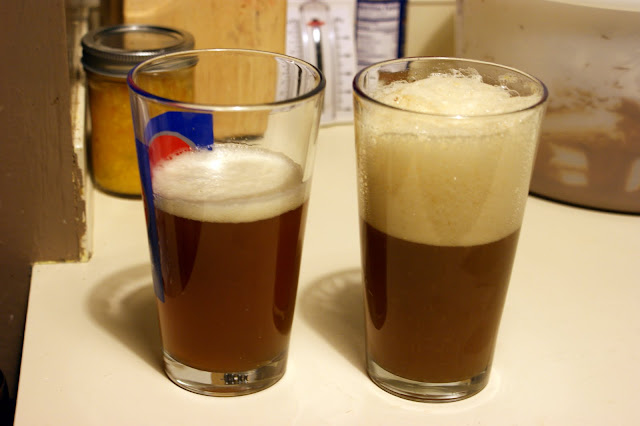 Either way, he ended up with a whole lot of foam in the sink and only about a 1/4 beer left after it stopped foaming. He drank what was left and we split my calm, peaceful beer. :)

Do you have any insight to share regarding the beer eruption and over-carbonation in this single bottle?
Email Post
Labels: brewing crafts food handmade