Ginger is known for it's exciting properties, and soothing effect on an upset stomach. According to Sacred and Herbal Healing Beers

by Stephen Harrod Buhner (and many other sources, as the information is well-known), this amazing root aids in blood circulation, can lower the body's temperature if one is running a fever, and contains anti-inflammatory properties among many other characteristics.

For my January brew (and the first brew I've ever done on my own) I've chosen ginger ale as my madness, and the methods are as follows: 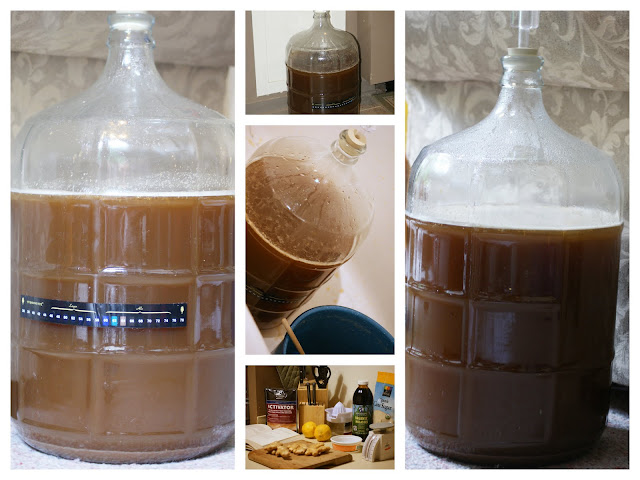 Using the book referenced above, I modified one recipe to meet a special preference I have-- that of molasses. I generally love the deep bodied roundness the syrup offers and ginger is a most-appropriate pairing. The recipe I used and modified (halved the recipe, changed ingredients) can be found on page 290 in the book (Ginger Beer -1857), and is an excerpt from A Sip Through Time

by Cindy Renfrow, originally from Miss Beecher's Domestic Receipt-Book: Designed as a Supplement to her Traetise on Domestic Economy.


I boiled the ginger for about 45 minutes in one gallon of water, then added some more water and the sugar, molasses and lemon juice then topped off the pot to 4 gallons (total capacity). After it all dissolved together and cooled, I strained half into another pot, added last gallon of water and transferred to the sterilized glass carboy. I strained the final 2 gallons of brew, added the beaten egg white and lemon zest, and then added the yeast. I poured this mixture in the carboy and swirled it around. Done.

Overall I think I should have been more careful about my sanitary practices - I did sterilize the equipment, but was lax with my wooden spoon and thermometer. I do not expect the beverage to be contaminated but would be disappointed to find the brew soured or ruined. The brew will ferment for 4 days at which point I will bottle and wait a few more weeks for consumption. I haven't decided yet if I should prime the bottles before filling and capping. (Edit 2/22: One of my bottles exploded and others were close, and I didn't prime! Be sure to ferment out more of the sugars than I did to avoid this dangerous problem.)

As you can see, the molasses gave the ginger beer a nice rich color. Had I used honey as the recipe called I would have ended up with the lighter color more typical for ginger beers. I wavered over my indecision to keep the ale simple, and next time I brew ginger ale I will toy with cardamom and juniper, or lavender.


Do you have any experience with homebrews? If so, share a memory of your first time with me!

If you like many of my friends and family and do not consume alcohol, consider brewing your own sodas! At the brew store yesterday I perused the book Homemade Root Beer, Soda & Pop