I cried tonight and haven't felt this broken hearted in a over a year.

Forgive me for not blogging; life here in Biloxi, Mississippi has been crazy for me. I don't remember what day I came to this place. Every day seems long and full to me but when I reflect back to what I've done and realize that I'm leaving here in a week, time seems to have flown faster than physically possible. 4.5 weeks is not nearly long enough to be here.

I haven't even told you all about my "regular" assignment at Hands On! During the mornings I go to an Alternative School for k-12 students with behavioral problems, and it so happens that a few of the students also have learning disabilities. I'm always working the javascript:void(0)same classroom with the same 9 boys, grades 2-7 I think and we spend most of our time in one-on-one tutoring in different subject areas, although we also have snack time in the morning, go out to play sports and have free time together, and sit together for lunch in the cafeteria. This has been a challenging and rewarding position, both mentally and physically. Some of the kids are so angry at the world and lack social skills and I've learned to communicate directly and help them with assignments. I've learned to play soccer in teams of 3 and understand the tantrums they throw upon losing. 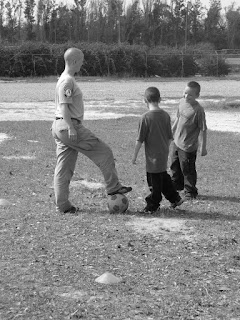 I've learned not to take insults personally. And I've fine tuned the patience I have in my heart and mind.

The wonderful woman in charge in this classroom impresses me constantly. I remember my first day in the classroom and this one little boy hit me and said "SHUT UP. YOU ARE AN IDIOT." My feelings were a little hurt-- I had only said good morning and that was his response to me. The teacher talked with me, explaining that it's really hard for these kids to deal with change, in time they will bond with me, and at the end when it's time for me to leave it will be harder for them than me. I didn't understand the truth behind her words until this week.

My high for today was a conversation I shared with the same boy I talked about above. Over the last few weeks his attitude toward me has been the same; I give him his space and always treat him with respect but he totally shuts down in my presence. I have been rewarded for waiting. Two days in a row we have talked together and today at lunch he initiated "thumb war" with me, laughing and smiling and talking to me. He is beginning to trust me.

The other part of my assignment here at Hands On Gulf Coast is my participation in a Boys and Girls Club with 130 members ages 5-14, with about 5 staff members that are actually able to work with the kids. Originally I was told I'd be there supervising kids, a sort of extra body needed in a club stretched short on resources. This isn't quite the case-- my first day there I spent the afternoon running in circles with ~20 children chasing me! Our regular schedule dictates a drink and snack just after school ends, followed by about an hour of fun out on the playground and soccer fields. Next is homework time and any other learning activities in the schedule. I do it all, running as hard and fast as I can while we are out, reminding 1st graders that they have to carry the one in addition, and telling 2nd graders they know how to borrow for subtraction. I watch Disney movies and hold hands with kindergarten kids. I guard the ball in basketball with the 6th grade boys, and let them laugh at my poor shots. And I've taken it a few steps farther....

Last week was Spring Break for the entire school district and instead of going to the alternative school I spend 11 hours a day at the Club. We averaged 50 members per day and to fill time the schedule had a lot of open space for movies-- maybe two full movies a day! I'd noticed the week prior that a good amount of students were restless during the daily movies, and since I was feeling unimpressed with the lack of alternatives I approached the program director about offering an art project to the kids that didn't want to sit in front of the TV. I was nervous and had prepared my thoughts for a couple days beforehand; I didn't want to sound precocious and try and change their system, but I did. She loved the idea and told me that they are just so understaffed and have such limited resources that movie time is often the best they can do with what they have. She encouraged me to come up with some project ideas and I went home happy. 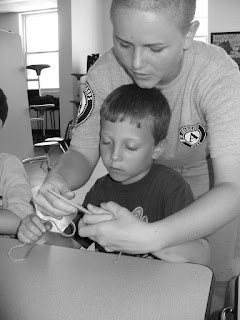 And I'm happy to say that since the beginning of last week I have had success in teaching over 30 kids between grades 2nd and 6th some of the basics in knitting! A handful of students are proficient enough to be working on their first project-- a headband or wristband! The K & 1st grades tied slip-knot necklaces. A few of the staff members are also learning so the project can continue after I'm gone. I called my mom and told her about what was going on so she shared a bit of money with me and I was able to purchase the supplies needed for projects and since then the program director has asked me to participate on a much deeper level, bringing in new projects for the kids regularly and even supervising entire grades sometimes.

The numbers sound pretty to my ears-- how many kids have I tutored? How many children have learned a new skill in my presence? How many hours were spent in a program with at-risk youth? How many projects were started, expanded or improved? These are all questions we must answer in NCCC, but the most painful and beautiful question is one I've only asked myself: How many children have found a friend in their silly leader Miss Amanda?

It turns out there are a lot. There's C, a little boy that draws pictures for me, waves at me from across the room whenever we make eye contact, created the first slip-knot necklace on his own and started a trend in the entire club, hugs me hello and hugs me goodbye, and always wants to be at my side. And there's his older brother C, a more grown version (3rd grade) and with a bit more spunk, pulling pranks on me and always tripping over his shoelaces. There's A, a little girl with long golden locks and caramel skin that hangs on me whenever possibly and loves to touch my fuzzy hair. There's N, a 2nd grader, our most advanced knitter. He's mature for his age, but I catch him trying to hold my hand sometimes and every day he asks if we can sit together and knit. Despite his shy exterior he has really opened up to me and follows me like a lost puppy dog. J, a 2nd grader that enjoys taking my turn during tag so I can rest, told me AND his friends that its ok for black and white people to be together, is also an advanced knitter. His older brother, sixth grade, runs and screams like a little girl when I chase him around the playground and laughs menacingly when I'm trying to get the ball from him on the court. He also helps J, the younger one, with his knitting. There's D, the sixth grader that bad-mouthed me for 2 weeks, but just yesterday asked to stay out on b-ball court with me instead of going in with the rest of 5th and 6th grade, saying that he has a lot of fun with me. There's C, the kindergarten student that writes love notes to another AmeriCorps member, and who cried into my shoulder one day when his daddy dropped him off in the morning. He plays tag with me whenever I'm available and shows off his Soulja Boy dance regularly. Little K, a first grader, yelled "Miss Amanda, I done made me a goal!" and came running for praise. He was the first person to express interest in learning to knit when he saw me working on a scarf during a movie one day. He also told me he knows how to "rap dance" and "slow dance." This is a photo of him grabbing my hands and demonstrating what slow dancing entails. 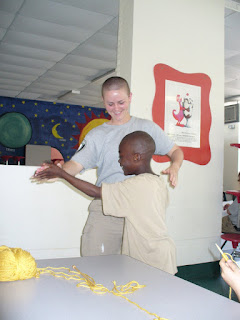 I guess most of that doesn't make sense to you, but the point is that they care. I didn't expect them to and the list of the the loving things they do and say goes on and on.

I've told the kids from the beginning that I'm only here for a short time and will be leaving soon, but this week it really began to sink in for all of us. The children most attached to me are hanging on for dear life and refuse to accept that I'm leaving, quite possibly forever. I don't want to go. I love them. I hate seeing them withdraw when we talk about having only one week left together.

My low today was realizing that just as that little boy is beginning to trust me I am going to disappear out of his life. My low today was having a 6th grader ask if I could stay any longer with him, and having both him and another turn and walk away slowly when I answered no. My low today was when the boy with whom I spend the most time withdrew after I explained that no, I wouldn't be back after my next project, or this summer, or this fall when school starts. It was hard for him to believe that I'm really leaving.

I can't explain. I do not want to leave these children. Some of these kids spend more time with me than they do their own parents and they treat me like I'm mom or big sister, and I'm spending my last day with them a week from tomorrow. I'm crying and I'm sad, but I suppose they are tears of love.
Email Post
Labels: americorps fiber arts knitting love