I couldn't have asked for a more pleasing weekend-- we'll begin with Friday.

Tanya stopped in at GVG and surprised me with fun plans to go swimming when I was done!

I went out to their house as fast as I could after finishing, and having just taken the pizza out of the oven, we hopped in the car (with the pizza resting on a towel) and took off for Porupine Reservoir. 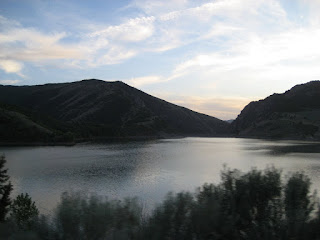 We arrived, ate, laughed at some 17 years old boys that dropped their pants and asked about their penis size, and swam out across the span of water that was in front of us. 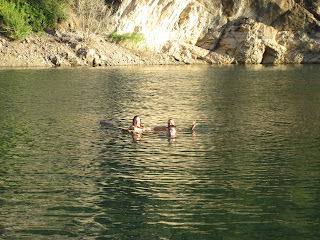 It was very refreshing to bathe our bodies in the cold water! After getting out we took over the fire the high school boys had left behind (irresponsibile, grrrr), warmed ourselves, and eventually put out the fire so we could head back to town. 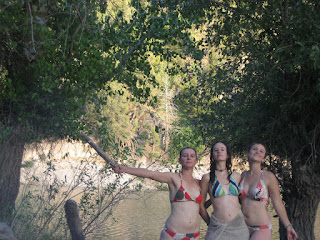 On Saturday afternoon I went home for the family festivites (it was my brother's 8th birthday and baptism) -- a fun bbq with family members I don't get to see often. Anyway, the big part of Saturday was rushing home, stuffing a bunch of crap into a backpack, and taking off for 2 days in the mountains. Yes, my friends took me out for my first backpacking trip, and in the process of it all I gained like 50 hardcore points! haha.

I ventured out into the abyss with Tanya, Brown and Mitch, and came home with 3 frenemies. Kidding, of course. In restrospect I think they took great care of me- I probably wouldn't have agreed with that at all the points, but by Saturday night I was so happy to find a comfy place to lay down and sleep that I could have kissed each of them and asked for 3 hands in marriage.

We started our adventure at the High Creek trail head, planning to hike up to High Creek lake- and chose to follow the path marked High Creek. The sign was posted, and they lead the way with my following behind. I assumed they all knew where we were going, but about 2 hours into it we realized we were NOT on the trail we had planned, and had ventured pretty far away from the creek. After some debate, the group members concluded (aside from myself-- I kept out of decision making for everyone's safety) that it would be better to do some bushwhacking and attempt to get to the lake our own way... 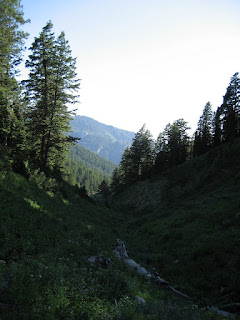 So, we cut through the brush and trees, and the dry soil, and rocky slopes of the mountain- gaining altitude pretty quickly and painfully. We knew that if we wanted to end up at our planned destination we would need to get up and over the major ridge. Of course, after much hiking and excitement that we had finally reached our peak- it was false. We had yet another ridge to cross before we could be where we wanted, so we continued on. It was getting late, so we kept our pace hurried and direct- pretty straight uphill. There were quite a few lengths of time that we required hands to get ourselves up over the face to where we wanted to be; (what we thought to be) the last sharp incline was a lot of loose shale, and an extreme pain in the ass when I started loosing my footing... of course, I found it. I'm alive.

Sadly, we were presented with another blow- we had at least one more ridge to get up and over if we wanted to reach the lake, and there was no way that could happen because the sun was touching down in the west, and we had to find somewhere to sleep before dark. 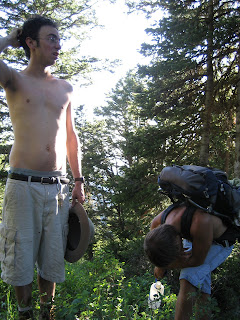 We took a breather before continuing on, and the view of my surroundings was spectacular- the ridge we were on connected directly to Cherry Peak, and the valley, and ranges and ranges of mountains were below us. 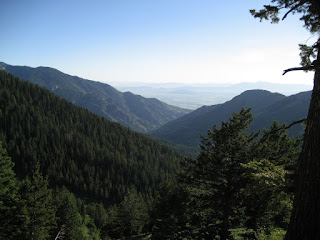 It was exhiliarating to see out so far and imagine ourselves at a high enough point on the curve of the earth to experience it. We dicussed our options- we could continue hiking along the ridge in hopes of finding a shelf to sleep on, but it would be cold and windy at the high altitude. We would need water at some point; we had filters, but assumed that because we would be going to the lake along a river path we would be fine for refilling, which was not the case when we diverged from our plan.

We chose to hike down, fast. It was crazy to look back and see how much 'progress' we had lost by retreating lower for safe and comfortable sleeping, but we were so grateful for the semi-flat clearing we ran into. We shouted our happiness and frustrations into the wind and heard our voices reverberate off the vertical walls which surrounded us.

Camp set up began- we gathered rocks to form a ring for our small fire, and found wood to burn. I was more happy than I can accurately describe to actually sit down and take off the jeans I had worn for the past 3 hours-- but as soon as I bent over/lifted my leg to remove them, my quads cramped. Oh my god, it was much worse than all the previous hiking we had just done. With both legs locked up, I was flat on the ground trying to stretch them out. It really didn't take too long to relax, and then we enjoyed our dinners. After extinguishing our fire, we climbed into our bags, looked up at the stars and bright moon, and told stories and jokes until drifting into slumber.

Upon waking, I was covered in sweat; the sleeping bag I was bundled in kept me extremely warm during the night, and after groggy good morning greetings 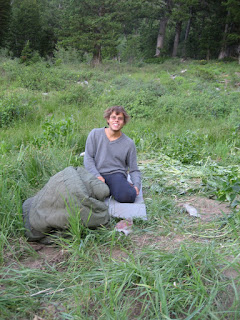 I was ready to get out on my feet again. 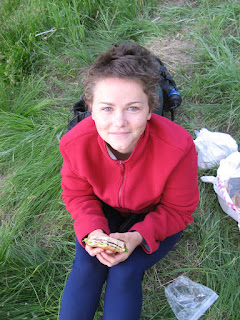 There was really no soreness (besides the chafing from my pack), and I felt full of energy. The hike down was luscious- loads of wild mint, delicate (but hardy) wild flowers, the high pitched hum of cicadas, and fresh spring water. Not too long into our descent we found fresh spring water bubbling out of the ground, and we filtered water into our bottles before continuing on. We followed the creek bed down and down and down, eventually reaching the trail we had originally started on, and before we knew it we arrived at the car.

We took a look around at our surroundings- and much to our surprise the sign we had followed only the day before (to the wrong destination) was gone. It had mysteriously disappeared. We went over, and it had been hacked off, or broken, right at the base of the post, but the post and actual sign itself were nowhere to be found. We can call it fate if we want, but the hike happened, and I enjoyed it. As our sore bodies clambered into the car, I mourned that our fun was nearing it's end. The trip was much too short, and I look forward to going on longer (better planned) jaunts in the future.

Btw, we went out and around to Newton for some swimming in the dam/lake after leaving High Creek. The swim today was MUCH more appreciated than the swim Friday. Removing the layers of sweat and dirt from our bodies was heavenly, and swimming around was great for stretching tight muscles.